Coming up.. digital switchover who's who and Stephen Fry and some Rhinos

Some thoughts and highlights


I was trying to explain who is responsible for the digital switchover (coming very soon to Border people) and I was working on a diagram. Here's a taster.. 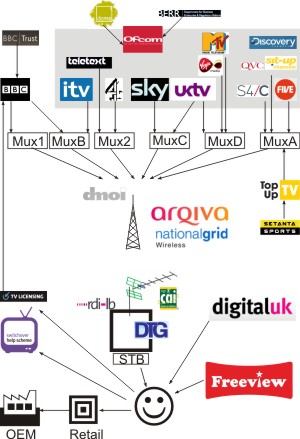 Good news about the RNLI, on Lifeboats get taxed by Ofcom - ukfree.tv - independent digital television and switchover advice, since 2002 Jordy writes:

"'ve now heard that OFCOM will grant a special dispensation to the RNLI, they will pay 20,000 initally to maintain the use of their frequencies for a yet undisclosed length of time... 20 grand is still a lot of money to a charity but its certainly good news!"

If you are not a Twitter person yet, try this.. Stephen Fry is doing a new TV version "Last Chance to See" the most excellent Douglas Adams and Mark Carwardine book and Radio series.

It is being Twittered "live" with occasional photos of Rhinos.

You can follow me via the Happy Greek Sheep to the bottom right...

Been a bit of a poor day for Sky ... BSkyB Shares Down Over 7% Following Pay-TV Report.