Changes to the "Frequency Information" section of the transmitter pages

I have updated the format of the sections for each transmitter page that shows the frequency allocations.


The changes have been made to make it easier to make comparisons between the various stages of transition between analogue-only and digital-only terrestrial.

The main change is that the channel allocations are now aligned above each other, and to allow for this format the name of the analogue channels are now abbreviated to BBC1, BBC2, ITV1, C4 and C5 and shown in italics. 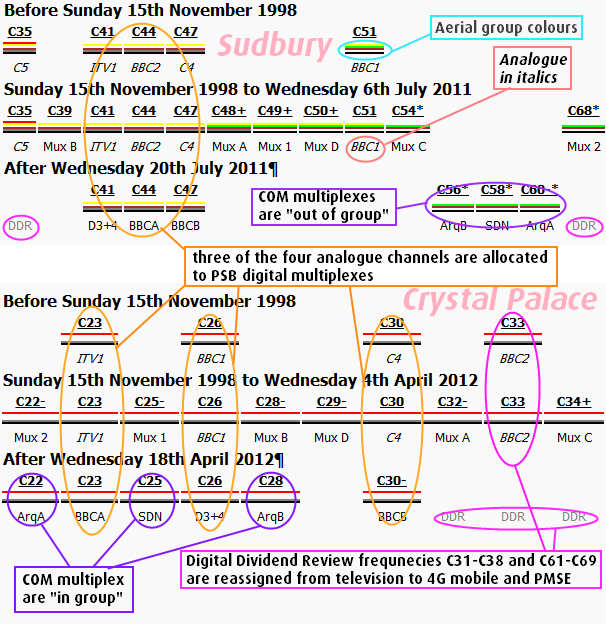 In addition, channels that have been removed from television use after switchover are marked with DDR for "digital dividend review".

The new format makes it clear that, for most transmitters, three of the four "old analogue" frequencies are allocated to the PSB multiplexes after switchover (the other usually being a DDR).


All questions
[][][
In this section
Comments
M
Mike Dimmick
sentiment_very_satisfiedPlatinum
4:02 PM
I realise it's a lot of work, but would it be possible to incorporate the interim stages for transmitters that can't go to final channels in one step?

I know that the information is available from Postcode Checker - Trade View (for example) but I find it more accessible in your format.

Mark A.'s 367 posts
M
Mike Dimmick
sentiment_very_satisfiedPlatinum
4:19 PM
Mark A.: Just like the broadcasters, we use decibels, because the signal strength reduces logarithmically with distance, not linearly.

One-fifth is actually not a very large drop in power - especially compared to the difference in signal-to-noise ratio required for PAL, which was 43 dB, and that for the post-DSO digital mode, about 20 dB. The other 16 dB is a margin to allow for the normal variation of levels - on analogue you'd see increased snow, annoying but not totally obscuring the picture, but digital would start cutting out.

Your box likely has a very wide range of gain available. Mine claims to handle 35 to 95 dBuV, a range of 60 dB or one million times the power. (1000 times the voltage, because power = voltage squared divided by resistance.)

At some sites, the pre-DSO digital power can be a tiny fraction of analogue power - e.g. Sutton Coldfield analogue is 125x more than low-power digital, or Sudbury analogue was 227x more powerful than Mux D. Using your method, the bar would be incredibly short, giving quite a false impression.