The BBC have placed an advert in Broadcast magazine asking for a single HD channel to join the Freeview HD line up - or even three SD channels.


The advert states that the services may start very soon:

The BBC is offering to the market an amount of spare digital terrestrial television capacity on Multiplex B which could enable the acquiring party (or parties) to launch TV channels as early as spring 2013. Channels carried within this capacity will be able to be watched on all Freeview HD and You View receivers.

The capacity is being offered to the market through a competitive bidding process.

If your company is interested in part or all of the capacity, you can register your interest by email at dttcapacity@bbc.co.uk

Expressions of interest must be received by 5pm on 20th December 2012. Further information, including commercial and technical details about the capacity and the sales process, will then be sent to you. 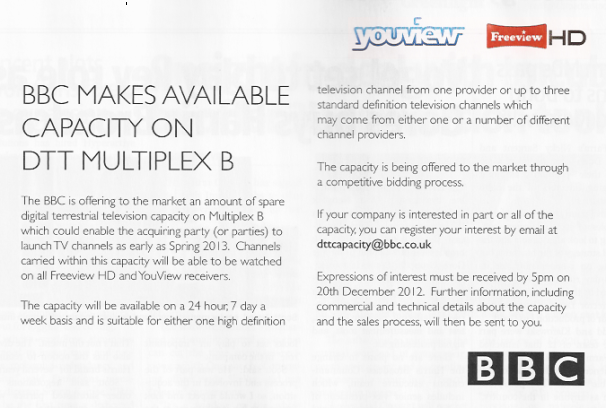 Which channel should be added to Freeview HD?

Dave's 126 posts
woodface
sentiment_satisfiedBronze
5:38 PM
Channel 5 have been canny with their dough.

Pitiable ratings for HD channels may mean we get more SD dross. With the viewer having to actively seek out little known HD channel numbers with numerous button pushes, most apparently settle for SD!

Freeview should mandate easy number re-allocation in all new sets & boxes. Our Sonys make it a breeze. So BBC1HD is on button 1, ITVHD on 3 etc.

woodface's 39 posts
S
Sid
sentiment_satisfiedBronze
7:23 PM
Worcester
Ch5 does have HD but behind a pay wall deal with sky.

sharealam's 225 posts
Josh
sentiment_satisfiedBronze
9:33 PM
I'd love to see an HD simulcast of the 24 hour BBC News channel - after all, BBC News as it is looks very professional on those big plasma TVs in waiting areas, why not go that bit further by launching an HD simulcast of BBC News?

Sid: Channel 5 HD is on Virgin Media as well.

Josh's 97 posts
J
JDT
9:17 AM
Please not another shopping channel. When I think back to the good old days of Freeview!

Seriously thinking of switching to Freesat. Can you get dual-tuner PVR's for Freesat? Does Freesat have HD?

JDT's 7 posts
Josh
sentiment_satisfiedBronze
10:12 AM
JDT: Yep, there are plenty of Freesat HD dual tuner PVRs! You will currently get 5 HD channels on Freesat.

Josh's 97 posts
D
David
sentiment_satisfiedGold
10:21 AM
Yes Josh, but we can't get Channel Five in HD.