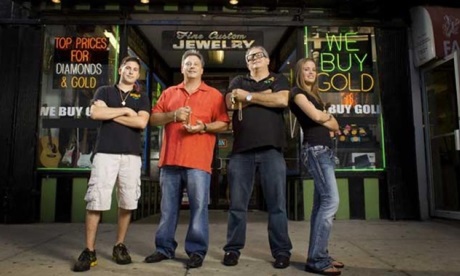 According to Broadcast the UK channel will include new home-grown content as well as programmes from the US.

"This kind of unscripted programming is doing incredibly well in the UK right now and we have a very strong pipeline of content, so it seemed to be the right time to take advantage,"Turner UK general manager Anthony Lukom told Broadcast, "Other channels have started to develop this genre in their schedule - but they are not dedicated to it. TruTv has a very clear proposition â€“ it is about larger-than-life, compulsive viewing.... TruTV shows real-life comedy featuring incredible characters in real-life situations, a formula that is enjoying ever-increasing popularity worldwide,"

The 24-hour channel will air this summer in on the Freeview, Freesat and YouView platforms, with Sky and Virgin Media to be confirmed.

Turner has already commissioned UK content for the US channel, including Killer Karaoke and Hardcore Pawn (photo above).


Help with TV/radio stations?
[][][
In this section
Comments
D
Dave Hagan
9:56 AM
TruTv just what we all want, I don't think.

mark's 9 posts
Briantist
sentiment_very_satisfiedOwner
10:41 PM
Mark: the licence fee pays for the BBC. Freeview light carries all the services you pay for.

Briantist's 38,844 posts
woodface
sentiment_satisfiedBronze
11:16 PM
Perhaps they're commissioning a UK version of Hardcore Pawn, but the crew in that photo are All-American, Yes Sirree Bob...

You don't often get 'Jewelry', shorts or 'physique' like that in Brighton!

With CBS Reality only recently landed on Freeview, we're looking like a dumping ground for a deluge of phoney 'factual' format TV. I'm no snob - I love Discovery Shed! - but I know scripted 'unscripted' staged fiction when I see it. Notice how they had to stop making 'reality' shows during the writer's strike?

With the dumbing down of the once great documentary channels like History and Discovery etc, commercial TV's IQ is falling fast. Let's hope the next election doesn't leave TJ Harris's friends free to make more BBC cuts. BBC4's demise would reduce telly's IQ to remedial.


woodface's 39 posts
T
trevorjharris
sentiment_satisfiedGold
3:13 PM
Well the BBC has been dumbing down as well.

trevorjharris's 367 posts
P
Paul Dorset
7:51 PM
Wimborne
I;m in the rowbridge transmitter area Colehill Wimborne Dorset and all my channels have gone and so have my neighbours bbc keeps coming in and out and pretty much every channel from 10 (itv3) and above are unwatchable they start then fade out sound goes and becomes pixelated I have searched all relevant sites but can find no reported problems or maintenance work. Any Ideas or help welcomed

Paul Dorset's 2 posts
MikeP
sentiment_very_satisfiedPlatinum
8:34 PM
Paul
It could just be the weather that is causing it. There is a well documented phenomenon that disrupts TV transmissions and there is nothing that can be done about it. Do not retune your equipment else you could lose all programmes.

MikeP's 3,056 posts
P
Paul Dorset
9:00 PM
Wimborne
Thanks for the reply and advice MikeP ive now got 1 thru 10 watchable and stable.

Paul Dorset's 2 posts
T
trevorjharris
sentiment_satisfiedGold
11:22 PM
It could be the weather as there is a high at the moment. You may get an improvement with a better aerial. If it persists it might be worth checking you are not affected by 4G. This can be fixed with a simple filter which I understand is available free. Just a thought.