I was fortunate to win some tickets to the annual meeting of the Digital Television Group at the DTG Summit today. The theme of the day was "co-allocation", a rather innocuous term for handing over the Freeview transmission bandwidth to mobile phone operators. We also learnt how advanced the plans are for Freeview to be equipped for a conditional-access to replace the TV Licence and saw the latest Freesat and YouView equipment. 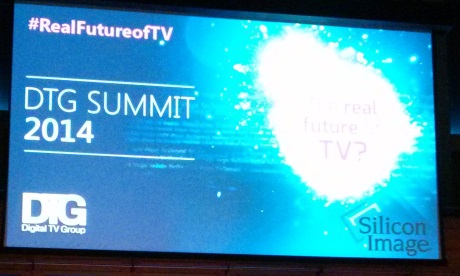 Before I tell you about co-allocation, I think it is worth mentioning a few other things I learnt today. Please do see the see FITT report, which came out today Future of Innovation in Television Technology Taskforce.

First, is that the rather amazing Freesat Freetime app for Apple devices is coming to Android at some point. This application once linked to your Freesat Personal Video Recorder box has all the features you might expect for finding TV programmes to record.

In addition, when you have content recorded on your box, the application shows you the details of the shows, and allows you to select and play the one you want. This makes it also as simple as Google Chromecast to pick and play TV content.

I have to say that I am very fond of Freesat Freetime: the interface is slick and simple and it "just works" and it is simple to access on-demand content: you can even step back though seven days of watchable content by just going left in the TV listings.

I was pleased to see that the second version of the YouView box was actually usable. The first box, which I had obtained from BT, I found to be unresponsive and buggy. The old box took ages to wake up, the interface was slow. If the internet failed for some reason, you had to disconnect the Ethernet cable and reconnect it to alert the YouView box to the return of your ISP service.

The new box, which I got to use for a few minutes, was much faster and thus responded to key presses when you made them, not seconds later. However the box did manage to forget about the MHEG5 text services and so would not access Red Button when asked.

In the session on Evolution of DTT, in the Q+A session that followed, I was able to ask Jonathan Thompson (CEO, Digital UK) about the migration planning for the BBC to become a subscription service, so that the Licence Fee could be replaced in January 2017.

The answer was that there are no plans in place to do this: Freeview is primarily a free-to-air platform and the stated policy is that it will remain that way.

You may recall that I have been posting for quite some time about the (Ofcom channel bingo II - introducing the bands) change of use of about one third of the existing Freeview broadcast spectrum for use by 4G mobile broadband.

It appears that (athough Minsiter Ed Vaize was not draw to a final commitment) the working assumption is that this will happen shortly.

The actual process will require the Ofcom Consultation to come out in favour, this is then forwarded to the EU who will agree this at the World Radiocommunication Conference 2015 (WRC-15). It is the WRC who would agree to the "Co-allocation" of 698MHz to 786MHz (C49 to C60)

If the co-allocation plan goes though, then if you use Freeview you have a good chance that all you may have to do is perform another retune at some point.

If you Freeview and have a wideband aerial, then it is almost certain that all you will to do is retune. However if you have a "grouped" aerial, someone will probably have to pay for you to have it replaced.

The reason for this is that when transmitters were changed from analogue to digital care was taken to keep the transmission in the same aerial groups: the planners wanted households to keep their aerials.

However, this was not the most efficient use of the UHF channels. If the constraint of keeping transmitters in their same group is removed then 12 lots of 8MHz in the UHF band can be re-purposed for mobile broadband, whilst keeping the current PSB multiplex coverage.

The projections also suggest that the change to this new plan may reduce the coverage of the commercial multiplexes (COM4, COM5, COM6) by a small amount.

All questions
[][][
In this section
Comments
P
Peter Dolman
9:21 PM
Hi Brian, many of our customers here in North Wiltshire still have problems with Freeview retunes, given the overlap of Mendip, Wenvoe and Stockland Hill footprints in this area. Auto retunes should find 119 offerings, many more are stored in practice. PVR's in particular produce unpredictable results when multiple versions of the same MUX are stored. And as Mendip occupies the C48 - C58 region, I assume it will be on the move again. So more consumer misery. All I hear is "why did they change from just the old 5 channels", so as you say Brian, try wearing the 'older customers' hat'...one day maybe we shall be coming from where they are now!

Peter Dolman's 13 posts
K
KMJ,Derby
sentiment_satisfiedGold
10:56 PM
Peter Dolman: In the frequency plan suggested by Arqiva the SDN and ArqA and B COM muxes would run as SFNs on C22, C25 and C28 at all or most of the "full service" sites. PSB transmissions from Mendip would change frequencies to C40, C43 and C46 as shown in the table at the top of the page.

KMJ,Derby's 1,811 posts
C
Charles Stuart
sentiment_satisfiedSilver
7:32 PM
Bristol
I'm sure there's a reason why this has not been considered but wouldn't it create far fewer problems at the next switchover if channels 31-41 were handed over for 5G services, rather than 49-60? Just because the Americans have chosen to use the 700MHz band doesn't mean that Europe has to do so as well. If this idea is possible, wouldn't it mean that almost no one would need to buy a new TV aerial?

Charles Stuart's 159 posts
M
MikeB
sentiment_very_satisfiedPlatinum
7:54 PM
Charles Stuart: Its almost certainly due to the fact that having mobile phones use the same band internationally is much more important to the telecoms industry (and those they lobby), than the need to buy a new TV aerial by some Europeans. Money talks.

MikeB's 2,579 posts
T
trevorjharris
sentiment_satisfiedGold
8:13 PM
Not surprised that there are no plans for the BBC to change anything to enable the end of licence fee. The BBC will not change anything until it is forced to.

trevorjharris's 367 posts
M
MikeB
sentiment_very_satisfiedPlatinum
10:40 PM
trevorjharris: Considering brianist pointed out in some detail the havoc and extra costs that would result from any end to the licence fee, why would they want to?

Of course we could go down the route of the Sky model, but looking at press reports about how they operate in selling their subscriptions, More Sky agents blow whistle over doorstep selling claims | Money | The Guardian , most of us would prefer not to. I'm surprised we didn't hear from you about this - in fact your silence was deafening.

MikeB's 2,579 posts
T
trevorjharris
sentiment_satisfiedGold
11:26 AM
The BBC do not have to follow the Sky model. There are many ways for the license fee to be abolished. The BBC are bound to say the license fee is the best way to finance the BBC. The license fee is just outdated and very unfair.

I have no experience of Sky door to door sales men but I did have an electricity sales man actually forge my signature on an agreement. Whenever I have ordered anything from Sky they always read out the terms and conditions in full. They also send a confirmation letter. I think Sky should pay commission on how long the customer keeps their subscription. In the end there are good and bad salesmen.

trevorjharris's 367 posts
M
MikeB
sentiment_very_satisfiedPlatinum
11:46 AM
trevorjharris: And yet Brianist has analysed the figures for any change from the licence fee BBC 2017: Tell me about the 16 options to collect the BBC 4 billion quid a year? | BBC 2017 | ukfree.tv - 11 years of independent, free digital TV advice , and none of them either bring in enough money, are fair, are relatively easy to collect income or are politically acceptable. The licenec fee is the worst solution, apart from all the rest.

You keep saying its 'outdated and unfair', yet you have not come up with a model that works. Instead, you keep saying the same thing, without any reference to reality.

MikeB's 2,579 posts
T
Trevor Harris
2:07 PM
Ok to start with the BBC is too big and so a smaller organisation will require less money. The BBC Trust would no longer be required. There are many ways to finance it. Sponsorship, voluntary and compulsory subscription, advertising etc. It is now clear that the licence is no longer able to finance the BBC. Just look low quality of most of the current output. ITV seems to be doing much better without a licence fee. The unfairness of the licence fee is well documented.