Why do less than one in five people with an HD set watch in HD?

Research has shown that after over a decade of high definition television (HDTV) broadcasts, only 17% of people watch high definition TV channels. This is when three-quarters of UK homes has an HDTV as their main TV set. Why is this? 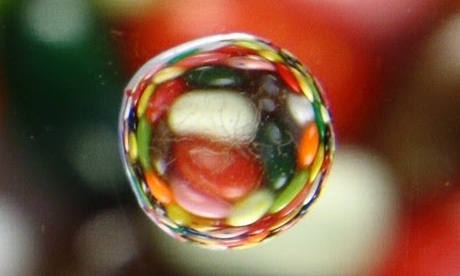 I have given some thought and I’ve come up with four main reasons:

What do you think?

Reason 1: Not everyone has an HD receiver.

UK TV first started receiving Sky HD broadcasts in May 2006, Freesat HD in 2008 and finally Freeview HD in 2010.   The digital switchover brought free HD to all homes in the UK by the end of October 2012.

However, for several years, HD television sets had the words “HD ready” on them.   This means that the sets required an additional set-top box to get Freeview HD.  Or, they could use a Sky+ HD subscription box or Freesat HD receiver.

Reason 2: It is a pain to find HD content as they are far away in the EPG

For the people who have the equipment to be able to watch in HD, it can still be very difficult to find the channels broadcast in HD.

Basically, this means you can’t surf the channel guide without making a very special effort to use the HD channels.

The logical place to find an HD channel would be as in place replacement, but only the HD satellite services do these simple swaps.  So, the upshot is that even with the satellite swaps STILL only a third of BBC Two viewers watch in HD!

This diagram illustrates the logic of HD channel numbers by showing their numeric distance to move from normal, standard definition (SD) to HD. 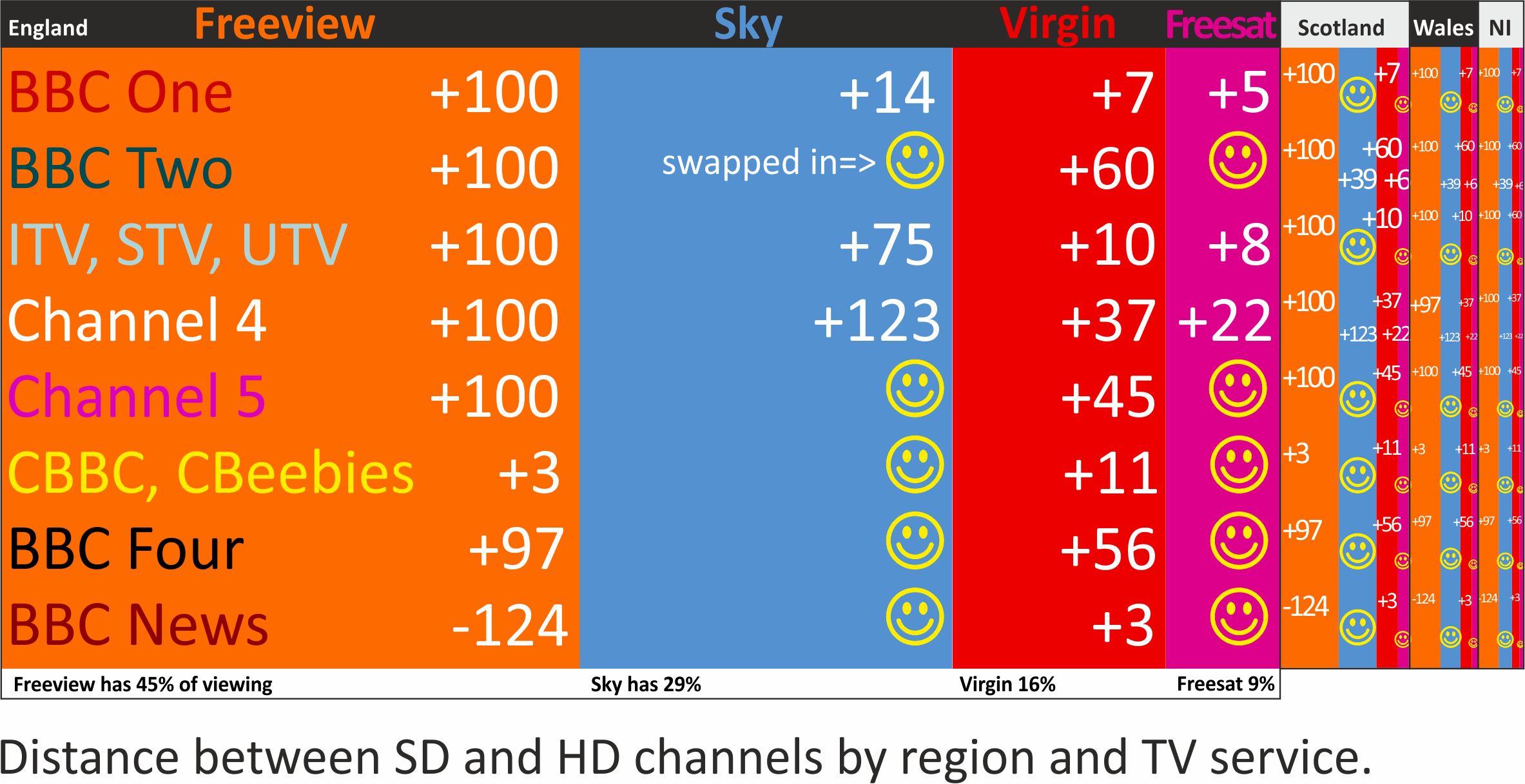 How do we know this is an issue for lots of viewers?

However, what is very interesting is that the share of viewers using the HD services for viewing the main free-to-air, public service channels (which get 51% of total viewing) is [5]:

Why are the figures so low?    It’s because on all Freeview sets, the HD channel numbers are not swapped with the single figures everyone knows, so you must know to add 100, 96, 97, 3 or even minus 124 to get the same PSB channel in HD.

It’s a little better on Sky HD and Freesat HD where you get in-place HD swaps for Channel 5 and in England BBC Two HD, outside England BBC One HD and STV or UTV.    And you don’t need to hunt for the other HD BBC channels: CBBC, CBeebies and the news channel.

Will this problem ever be fixed?

Perhaps in hindsight it should have been the law for HD channels to be swapped into the EPG in the right place and for the broadcasters to provide regional news and adverts in HD for everyone?

There are good technical and money reasons for this: the regional news on BBC One costs a fortune to provide but there’s no budget to broadcast them all in HD on satellite; Channel 4 and ITV are paid for by advertisers who paid for the regionalization of adverts.

This situation may improve when Freeview eventually becomes a “HD first” service, which might be in 2022 perhaps?

Reason 2b: And your TV salesman isn’t going to explain this to you…

Understandably, TV sellers want to show their merchandise at its very best. And the best way to do this is by showing specially made, extremely high-quality videos.  Not by showing reruns of East Enders.  That means you don’t get to see how to set up HD channels when you get the TV home. And it would be a very dedicated salesman who had the time to show you.

Have a visit to your local TV store and you’ll see this in practice.   This week I checked out my local Curry’s PC World.  Curry’s was using their old favourite of blockbuster 3D animated movies, which always look good on any screen. 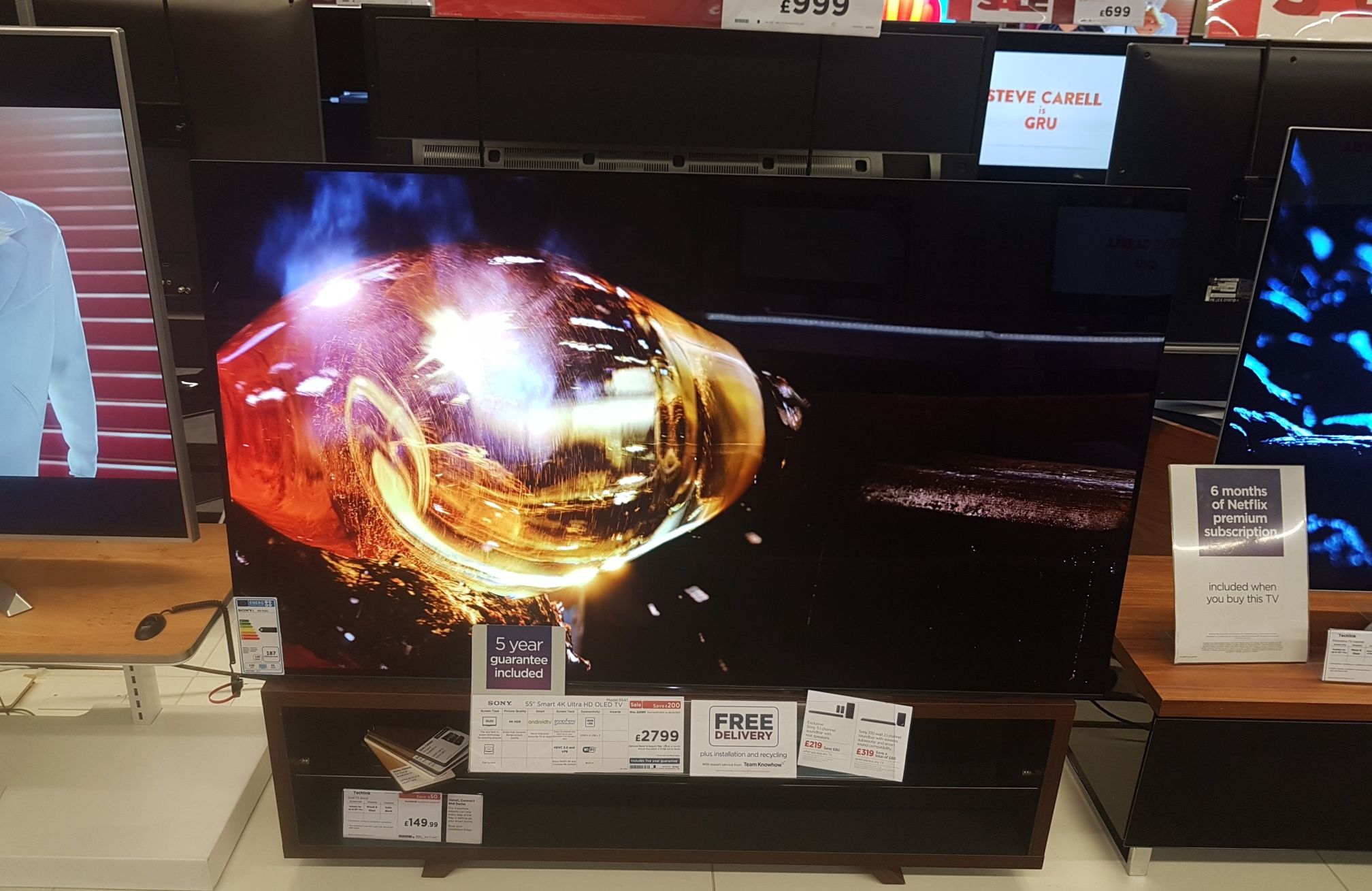 Reason 3: Not all shows look that much better in HD

If you have a relatively new TV, you probably won’t be too bothered about finding those HD channels. Your favourite shows will look just great even on the normal channels.

There are TV programme genres that do really benefit from being watched in HD, especially nature documentaries and live stadium sport.  But a lot of what people watch is news, soap operas and quiz shows. While these shows will look better in HD, the difference isn’t that great on modern TV sets.

Reason 3b: Shows made before 2009 were never made in HD

And you’re probably still watching a lot of reruns that were never made in HD anyway.

TV channels that show archive programmes (Drama, E4, Dave, ITV 3) or US imports (Pick, 5 USA) are incredibly popular among UK viewers. And these shows won’t have been produced in HD if they were made before 2009.

Reason 4: Eyesight is less good at the age where people watch lots of television

Forgive me for pointing this out, but for many of us we just can’t see the benefit of HD television. If, like me, you’re getting near middle aged, you’ll know all too well that eyesight declines with age.   This is shown here on this chart.

And, its mostly people over 65 who watch a great deal of broadcast TV. Younger viewers prefer to use streaming services (Netflix, YouTube, etc.). And this trend is growing. [4]

Isn’t it ironic that the people who are watching the most broadcast TV get the least benefit from HD?


Help with High Definition?
[][][
In this section
Comments
P
Psohlavec
9:27 AM
My view is those people who do not watch the high-definition version of a transmission do so simply because they do not recognise a good image. I worked in photography and then as a Television Engineer when I was young. I am over 70 now. Any defect in an image is a source of irritation to me, yet even before HDTV I found most people look at the subject in an image, (say a photograph) before considering the quality. I always look at the quality of an image and secondly what is in the image. I found most people could not even tell an image is poor quality, until it was pointed out to them.

Psohlavec's 6 posts
R
RichardH
12:35 PM
Completely agree with Psohlavec's comments. I am a long-serving x-ray engineer so used to LOOKING at image quality but 90% of the population can't tell the difference between HD and non-HD images, they are taken in by the hype and think they are watching HD although they (usually) aren't.

One comment on the article; some Freeview sets do allow you to move programmes around, I've swapped our two televisions programmes so that when BBC 2, Channel 4 or Channel 5 is selected HD is automatically occurs - BBC1 there is no local HD and ITV HD is the wrong micro-region.

RichardH's 7 posts
M
MikeB
sentiment_very_satisfiedPlatinum
2:36 PM
RichardH: Actually, people can generally tell the difference between SD and HD pretty easily, once they get used to it. The biggest barrier (apart from people who insist they can't tell the difference when I show them instore, because they have made up their minds, no matter what their eyes tell them) is simply that they forget to watch an HD version.

However, once they get used to watching in HD, SD suddenly looks pretty fuzzy. On the other hand, I am often amazed at what people put up with when they dont need to, because of habit or inertia, or sheer cussedness.

MikeB's 2,579 posts
P
Paul Bale
10:30 AM
Totally beyond me why people don't use HD channels. Perhaps if there were more of them or the SD broadcasts were removed they would have to. On small screens I can understand people thinking there is no difference in spite of the fact there is. But on any screen above 32" the difference is very clear, especially on any titles which are always slightly blurry on SD. I guess its like many other things, people need educating about it. I find it hard to watch anything SD any more, so am pleased to have 26 French HD channels available where I live in the south of France plus the few I can get from the UK when my Panasonic blu ray recorder with Freesat decides the signal is strong enough to give me decent pictures on the four HD channels it can get from the UK Astra satellite.

One reason is that most TV sets start on the first channel when you switch it on. That means people see BBC1 in SD by default. Bear in mind that many people are not technically minded and don't grasp that HD means better picture quality but they have to select different logical channel numbers on their TVs. Talking to my neighbours revealed that most did not know that BBC1 HD is on LCN 101, BBC2 on 102, etc (but often the regionalisation on HD is not local enough). Some cannot receive those because their TV is not Freeview HD capable, it may be an older set or merely be HD Capable (which only means the display screen can show 1080P but not that it has the required DVB-T2 tuner to get the HD transmissions. Many people are used to the idea that buying a TV set is something they only do occasionally with several years between purchases, in many cases they wait 7-10 years or more before replacing an older TV. Then consider how listings magazines show the channels. Most only give the SD LCN and not the HD ones (at least in all the ones I've looked in). So inertia is one reason and lack of information in a simple form is another.

MikeP's 3,056 posts
W
Willie Bone
sentiment_satisfiedBronze
10:34 AM
Troopers, Some viewers cannot PERCEIVE High Definition imagery which has nothing to do with attitude of mind, wearing the wrong spectacles, aptitude of an individual or how standard vision channels are prioritised on an electronic programme guide!
It's like somone who cannot tell the general difference between mid-fidelity DAB and the same channel outlets on higher audio quality online radio! You either get the drift or you don't!

There is a rate of diminishing returns verses cost when viewers are invited to leap from 1080i/1080p video quality to UHD television content! I suspect UHD will be a back burner revolution as a result! Time will tell..

Willie Bone's 55 posts
D
Diana Brown
9:53 AM
I find that HD seems to take something out of the volume of sound on my 1year old Samsung 43 inch TV. So, as I am one of those ''older viewers'' I am quite happy to stick with standard.
I do record on a Freeview box which is over 10 years old and find the quality of the sound is much better than on my Freesat Humax box.

Diana Brown's 2 posts
M
MikeB
sentiment_very_satisfiedPlatinum
7:23 PM
Diana Brown: You can vary the sound volume on different inputs - go to the setup menu. If your recording to a seperate box, remember that box will it have it's own separate volume, which needs to be set to maximum, and the tv can also have it's own volume for each input.

Frankly, if the sound is that bad (and the difference should be no more than marginal) then get a sound bar. Watching a tv in standard just isn't as good as hd, and is frankly not getting the most from a tv.

Diana Brown's 1 post
B
Banacek
10:49 PM
Diana Brown: We don't watch HD because of appalling lip sync, outside the adjustments range available on our Sony KDL. I haven't looked for a long time because the standard picture is quite enough for us.
JK