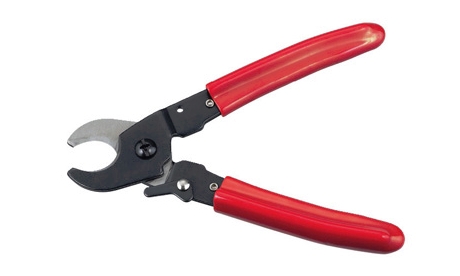 With only two days’ notice, Channel 4 is abandoning Freesat.

Channel 4 HD has been on air for over a decade, but it seems that they no longer need to broadcast to the whole of the UK public.

Channel 4 is a public service broadcasting channel that pays for the programs it broadcasts using the in-show ad-breaks.

However, it seems that it can fork out £75 million to steal The Great British Bake Off from the BBC but can’t afford to show the channel in HD to Freesat users.

Which is a shame, as High Definition channel has always been part of the Freesat HD line up. 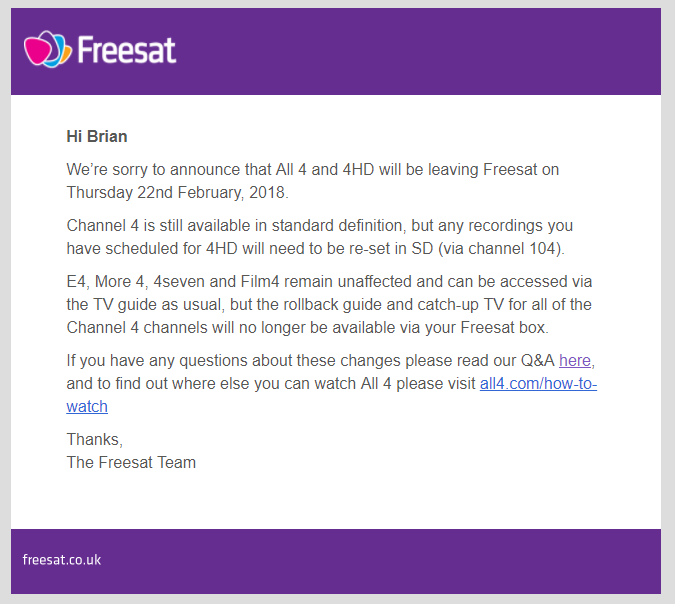 It’s interesting to note that the channel still will be shown to Sky viewers in HD, and will also continue Freeview HD.

Perhaps we have reached “peak television”?   Perhaps Channel 4 is so undermined by Netflix and Amazon it can’t afford to broadcast itself properly anymore?

But surely If a public service channel can pay out £2.5m a year to four members of the management team each year, it is shocking that it can abandon Freesat HD viewers.


Help with High Definition?
[][][
In this section
Comments
Briantist
sentiment_very_satisfiedOwner
2:23 PM
My report from the Freesat launch event, a decade ago... Freesat Launch: brilliant for everyone

Ian's 9 posts
I
Ian
4:54 PM
It's about time all PSB were forced to transmit the same on all platforms. I also think everything on freeview should be available on freesat.

Ian's 9 posts
D
Darren
9:44 AM
Does that mean that it will also be axed from Sky too - because Sky use the same satellite? It makes no sense to offer it to only Sky customers and not to freesat customers because either way they've still got to send it up onto the satellite, only difference is they encrypt it if it's on Sky. Does it cost more to send an unencrypted signal onto the satellite then or do they work it out by number of viewers?

I'm really confused. Also one thing that might have helped if Channel 4 actually got rid of the number of alternative versions of Channel 4 broadcasting on to the Astra satellites. I know they have regional adverts but surely instead of having about 20-30 Channel 4's on Astra, just have one national one that shows national "satellite" adverts, and if you want local adverts then tune to the one on terrestrial TV.

Btw in case your wondering what I mean about 20-30 C4's is if you have a Freesat or Sky box you don't see them because they set up to your own region automatically, but if you have a DVB card in your PC or a basic FTA box without the freesat stuff built in about the top 20 channels are all Channel 4 and each one is a different region - the only difference being the adverts, like C4 West Midlands tends to show adverts for places like West Midlands Safari Park, C4 North West will show adverts for places like Gullivers World and Knowsley Safari Park, etc...

Darren's 10 posts
T
Tony Watson
9:46 AM
We have no choice here, Freeview is a joke. How many other parts of the UK have to use Freesat for the same reasons?

Tony Watson's 1 post
R
Ron Riley
9:51 AM
Thank you for bringing this announcement to our attention we have not noticed that in any other format so it will be interesting to see what the advertising revenue for Channel 4 HD being lost will affect Channel 4 is reviewing him especially as this channel has a large following in the 18 to 32 age bracket because of some of the programs that it shows that people would much rather watch these in HD than in standard definition also as mentioned by others the reception Channel 4 on Freeview is not the same.

Ron Riley's 1 post
J
John Clemence
10:07 AM
I can't help feeling that we are being driven towards cable and subscription satellite and then on to internet streamed services which may actually dispense with aerials and dishes altogether but that does mean a massive investment in the infrastructure of the fibre services. But that's where we are all heading. 5 years, 10 years - not a lot longer I'd say.

John Clemence's 6 posts
M
MikeB
sentiment_very_satisfiedPlatinum
10:23 AM
John Clemence: there is no evidence at all that we are being driven towards anything like that - in fact, Sky is looking more to streaming services than it has previously, rather than sta. based subscription.

The reality is that streaming uses lots of bandwidth, and there wont be the capacity or coverage for most people any time soon, with many of my customers barely able to get BBC Iplayer on SD.

The C4 announcement is strange, but perhaps there is a commercial imperative behind it - because I'm slightly surprised that they'd yank the HD but leave the SD - its Freesat, so its not like its a matter of tuners....

MikeB's 2,579 posts
S
StevensOnln1
sentiment_very_satisfiedPlatinum
10:49 AM
Darren: There are 6 versions of Channel 4 SD (not 20-30 as you claim) on satellite carrying different advertising regions (Channel 4 is also split into 6 region on Freeview) and 1 version of Channel 4 HD. Encrypted channels on satellite are not cheaper (someone has to pay for the encryption on top of the transponder capacity) and there are no separate encrypted versions of Channel 4 in either SD or HD for Sky viewers.

Following the announcement yesterday, Channel 4 confirmed that the removal of C4 HD and the All4 catchup service from Freesat is due to a dispute over charges levied by Freesat for channels to appear on their EPG. There has been no suggestion that Channel 4 HD will be encrypted or become a pay channel on Sky. See the statement from a Channel 4 spokesperson at the end of the article linked below:

StevensOnln1's 3,438 posts
I
Isabel Tolley
11:36 AM
I just wish UK Free TV would provide ALL programmes with subtitles. ITVbe is particularly lacking. No fun for people (of all ages) with hearing impairments.